Below is a link to Dibson's set from September 16th, 2012 in Vancouver, BC.  He shared the stage with RC Johnston, Paul Schutz, and Ryan Leaf.  The picture was taken by Paul Schutz and was borrowed by the click of my mouse via his website (www.paulschutz.com)

Dibson had some nice original pieces that he he played, and through out a few traditional pieces (along with a cover of Red Pony).  I did not know the names of some of the tracks, and I encoded it to 320 mp3. 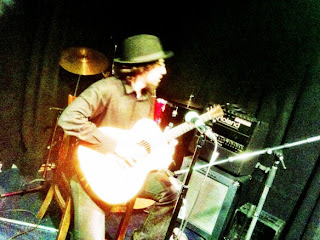 Password: dibs
Posted by Falling Leaf at 7:58 AM 2 comments:


On September, 16th, 2012 RC Johnston played 2 sets of primarily hawaiian inspired music. These songs came to fruition after visiting the Big Island for the first time.

The performance was held at the Cottage Bistro in Vancouver, BC. Fellow guitarists Paul Schutz, Dibson Hoffweiler, and Ryan Leaf shared the stage that evening (those recordings will be available shortly too). The majority of these songs were heard for the first time this evening as they have yet to be recorded.

My memories of the evening were that the crowd was very respectful, and that they were there for the music. There were many of RC’s friends and co-worker’s there (including his fellow high school pal and longtime friend Richard). My Parent’s, aunt, and good friend Herb made the jaunt to Vancouver too! It was a great evening, and I for one am happy I was able to partake (and listen to these fine guitarists to boot).

I purchased a zoom H4N the night before leaving to Vancouver. This is what recorded the event. I set a little mic stand to the left of the performer (the stage was just to the right of the front door. You will hear some noise from people coming and going (and traffic outside), but overall I was impressed with the outcome of the recording. I edited into tracks so that tuning/banter are their own tracks. In itunes choose gapless playback, or no time between tracks if you are using another audio player. I did not compress into a different format. Each set is in a zip folder and I included a front cover (along with a couple photo’s).

I did get some film footage of some of each artist’s performance. I will post in the upcoming months. 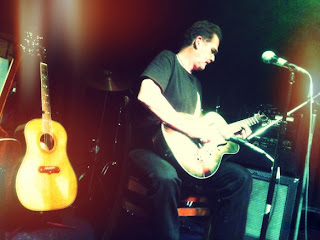 The picture was taken by Paul Schutz and was borrowed by the click of my mouse via his website (www.paulschutz.com)

Posted by Falling Leaf at 9:02 PM No comments:

Below is a link to the live set by guitarist Paul Schutz.  This set was performed in Vancouver, BC on September 16th, 2012.  Paul shared the stage with a few other guitarist's that evening. You can reach Paul via his website:  www.Paulschutz.com

As usual if using itunes under options save as a gapless album.  Banter/tuning were edited into their own tracks.  I used a little bit of compression and EQ when mixing.

Password:  schutz
Posted by Falling Leaf at 8:47 PM No comments:

Below is a link to an archive of John Fahey recordings.  Please let me know if you have anything to add to them.  There are 2 barn shows as someone remastered one, and I left the original one for purists.  They are in mp3 format (320 I try to do).  There may be a couple in AIff which is apple format.  If you have issues converting aiff a nice free program is all2mp3.  I do ask though if you download off of here and share, that you clearly let people know these particular shows are mp3 format.  Enjoy!!!

Please reply/review on shows you like, so that other visitors can have an idea of what they want to download.  Thank you~